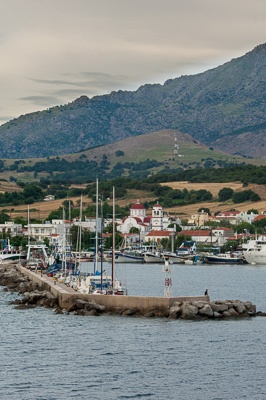 From Kamariotissa go NW towards Palaiapoli, which is at adistance of 6km.Paleopolis: Sanctuary of the Great Gods-Kaviria MysteriesPaleopolis is one of the most beautiful archaeological sites sinceit is located in Katsamba 19 acre wild life refuge, ideal for birdwatching. The ruins of the Ancient Town and the Sanctuary ofthe Great Gods buildings can be found there. This is where theGreat Mother, Kadmilos, God of prosperity, Kaviri and God of theUnderworld with his wife were worshipped. These Pro-HellenicDeities were adjusted to their own Pantheon by the Greeks andsuch glory was awarded to the sanctuary that Samothraki wasknown as ‘Delos of the North Aegean’. This is where the famousKaviria Mysteries were carried out. Initiation was carried outat night by the light of large torches and lanterns and it differedfrom the ceremony in Eleusina in that initiation to the Kaviriawas independent of social class, age and nationality. Throughcontact with the divine, the mystic ensured protectionfrom dangers at sea and moral perfection andSamothraki accumulated funds from this financiallyrewarding tourist pilgrimage activity.King Philippos II of Macedonia met Olympiada,mother of Alexander at the Sanctuary. Herodotusvisited the Sanctuary to be initiated into the rites ofthe Kaviria.The founder of the science of Philology, Aristarchus Samothrax,was born here in the 3rd century BC. Ieronymos, the sculptor,came from here.In the archaeological site whichcovers the banks of the streamsdescending from Mount Saos onthe northern shores of the island,the visitor discovers the Portico ofPtolemy II Philadelphus (285BC), theDome of Arsinoe – a rotunda, offeringby Queen Arsinoe, sister and wifeof Ptolemy II, to the Great Gods, - thePalace, with its 4m high walls andSacred House next door, CeremonialDance Building, Sanctuary of the Great Gods, Alley, Fountain,enchanted by the strength of its stone, which the Samothraciansworshipped as if it were a Goddess.Samothraki Archaeological MuseumYou will be initiated into the history of the island from prehistorictimes to the 3rd century AD at the Samothraki ArchaologicalMuseum in Paleopolis. You will feel awe on seeing the marbleinscription which forbids entry to the uninitiated into the palacesanctuary “Entrance to the uninitiated is forbidden”. You canadmire the sculpted marble propylon frieze of Temenos, fromaround 340BC with its charming dancers. You can see the effigyof the oracle Teiresias, which, due to a misunderstanding, wasused as a model for the portrait of the great philosopher, Aristotleduring the Renaissance. Of the famous statue of Victory, which isnow in the Louvre, you can only see the cast, but you will have thechance to admire another masterpiece of sculpture dating to the2nd century AD, the statue of Victory which was dedicated to theSanctuary by Dimitrios Poliorkitis after his victory in Cyprus. Youwill wonder why a fish hook is displayed in a cabinet. It was a giftfrom a lucky fisherman. A gold brooch in the shape of a lion fromPersia, silver coins, silver and gold earrings, clasps, rings, a goldnecklace, gold wreath etc. dating from the end of the 6th centuryBC until the Augustan era bear witness to a thriving civilizationwith international irradiation. A charming winged clay cupid of the3rd century reminds you that Samothraki is one of the most eroticislands in the world.Paul the Apostle’s Pew7km from Kamariotissa there is a semicircle peristyle built in theSamothraki style decorated with four large mosaics which representPaul the Apostle’s passage through the island in 49AD. Inthe centre there is a verse from the Acts of the Apostles (16, 9-12)translated into many languages which tells us that while Paul theApostle was in Troada, he saw a vision in which a Macedonianman asked him to leave Asia, go to Europe and preach the Biblein Greece. Paul then left Troada by boat and went to Samothraki(probably docking in Paleopolis Port). He slept there and the nextday went to Neapolis (known as Kavala today). Every year, onthe eve of the Apostle’s name day (29th June) the Holy Metropolisof Alexandroupolis honours hismemory by staying awake.Continue for 1.9km, turn right towardKariotes and after 900m you willreach your destination.Ano and Kato Karyotes: The areais green with plane trees, chestnuttrees, cherry trees, maple trees, oaktrees and wild pear trees. The Churchof the Birth of the Virgin Mary, builtin 1893, is a significant memorial.Return to the Kamariotissa - Samothraki Springs provincial roadand after 4.7km you reach Therma (duration: 6 mins).ThermaFonia Gorge-Vathres-Vdelolimni-Fonia CastleTherma, or Loutra, east of Paleopolis,took its name from its sulphurichot springs, known since Byzantinetimes and we now know that thisindicates great importance in developmentin the geothermal field.Therma combines the beauty of the mountain with that of the seaand wild vegetation with abundant running water. Ascents to Feggariand the path which takes twenty minutes to get to the firststage and Fonia Cataract begin here, amongst puffy hydrangeas,dense chestnut trees, Arbutus, Myrtles and the unique Martinioak forest. Tradition has it that in winter, Fonia Cataract sweptaway everything in its path – hence the name Fonia (Murderer).Vathres (pools) are formed by the water of 12 rivers which beginat Feggari, the peak of Mount Saos, and on descending, they createan equal number of large canyons and hundreds of pools andstreams.Therma is a centre of attraction for young people. Climbers alsobegin their journey here to the highest peak on Mount Saos, aclimb which takes 4 hours. If you follow Fonia Cataract to the sea,you will come to Vdelolimni, a shallow lake next to the sea mostof which is covered by an Alnus Forest, unique in Greece. On thecoast, where the water torrent flows, Fonia Castle emerges, abuilding by the Gatelouzi from the middle ages.After Therma, continue toward Ano Meria. You will reach yourdestination after driving 9.38 km in 12 minutes.Ano Meria, a housing settlement today, flows out of the River Agkistro.On Kasteli Hill, at an altitude of 180m, behind the old school,is a fortified medieval enclosure, part of an extended medievalhousing complex.