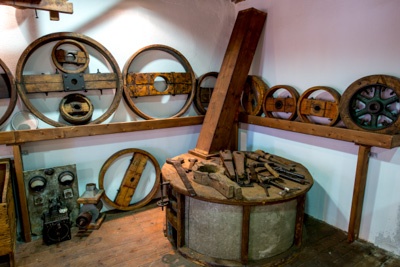 From Komotini, head SE towards Maroneia, go past Kosmio andafter 17km you enter Xylagani Village, the farming district of arich (cotton and cereals) irrigated valley. Xylagani used to be famousfor its garlic, which is quite rare these days. The residentscame here in 1924 from East Romelia when the populations wereexchanged. On the main road, at the exit for Maroneia, there is arestored flour mill (donated by the Ouzounopoulos and Atzemianfamilies) that houses the Folklore Museum of the “Xylagani CulturalClub” (POX), covering an area of 700m2. Physical evidence ofart, life and the history of the area – donated by village residents –demonstrates the popular culture of the area. Photographic ma-terial has been used excellently. http://www.xylagani-mouseio.gr/ Call before arriving: +30 25330 22388 and +30 693 6148 685.11km from Xylagani, you reach the traditional listed village of Maroneia,built on the foothills of Mount Ismaros, with a view theThracian Sea, Thasos and Samothraki. It was founded in the 16thcentury when residents of the homonymous seaside town camehere to escape from pirates. Make sure you rest for a while underthe plane trees of the picturesque square.Wander in the narrow streets with the 19th century Macedonianstone mansions (Hatzhalexis, Karavas, Panderymenos), built ata time when the Maroneia tradesmen and bankers excelled in theHellenistic centres (Odessa, Trieste, Alexandria, Constantinople),and brought wealth to their homeland. See the 18th centurychurches (Panagia and Agios Ioannis Prodromos) and the 1908school. Its building material came from ancient Maroneia and themarble from its theatre! At the Tavaniotis mansion, there is anexhibition about “Maroneia and Ismaros from prehistoric timesto modern times”.Ancient Maroneia, on the southwest slopes of Ismaros, foundedby colonists from Chios in the middle of the 7th century BC, was agreat commercial and nautical centre well known for its an excellent,mild climate. In the 4th century BC it had taken over most ofthe trade in the Thracian area. It was annexed by Macedonia inthe middle of the 4th century BC, and in 167 BC Rome it entered analliance with Rome. Its prosperity continued into the Byzantineperiod.The fortifications of the classical town are 10km long and cover anarea of 1,000 acres from the shore to the top of Ismaros mountain.The archaeological site is vast and visiting it is particularlyinteresting as there is a large variety of archaeological findings ingreen scenery dominated by olive trees.Journey in Ancient Maroneia4km from Maroneia, towards Agios Haralambos, there is a signon the right informing visitors about the foundations of the DionysianSanctuary (4th century BC). A clay mask of Dionysus wasfound here and is now on display at the Komotini ArchaeologicalMuseum. Further down, on the central dirt road, go pass the ancienttheatre of Maroneia, continue parallel to the Thracian Sea,below Ismaros and its ancient town and part of its walls. One kilometerfrom the theatre, you enter the area of Marmaritsa withwhite stone (ancient quarry). Continue between the olive grovestraversed by the E6 national path. 2km past the theatre, on theright, there are two pebbled bays in Marmaritsa, just 300 kmfrom the central dirt track.The Ancient Theatre of MaroneiaIt was built in the Hellenistic Period and underwent modificationsduring the Roman era. Three rows of the stone koilon have survived,the central one and the horseshoe - shaped passage to theorchestra and the Roman stage building.The theatre could seat 2,500 in 10 rows of seats. Below it a pipehad been installed to channel the mountain water to the sea. Themonument was in use until the 4th century AD. It has exceptionalacoustics: the site where it was built is still called Kampana (Bell)today! In the summerof 2009, restoration work was completedand the first performances after 1,600 years of silence took place!The archaeological site surrounding the theatre is open Monday– Tuesday: 8:00-15:00 and Wednesday – Sunday: 8:00 – 16:00.Agios HaralambosFrom Maroneia take the 5km road which leads to the sea, andthe harbor of Agios Haralambos, where local fishermen sell theircatch of fresh fish every morning, providing a delicacy that hasaccompanied local wine for ages. This is where the ancient harborwas, and its breakwater and the remains of Roman and Byzantinemonuments can still be discerned.From Maroneia to Petrota and Arxaia ZoniSet off for Agios Haralambos after Maroneia. After 4km you willsee signs leading to the Ancient Theatre. Turn left here and youwill find yourself on an unsurfaced road. It is accessible for allvehicles for the next 1,700 metres, until you reach the theatre.To continue from that point on, a 4 wheel drive vehicle would bemore suitable. After the theatre, continue parallel to the ThracianSea, below Ismaros, its ancient town and part of its walls. At adistance of 1km from the theatre you enter the Marmaritsa regionwith its white stone (ancient quarry).Continue between the olive groves crossed by the E6 nationalfootpath, and after 2km and past the theatre on your right, thereare the two pebble bays of Marmaritsa, just 300m from the maindirt road. After 1km you will see a sign showing the way to theMegalithiki gate and the wine press (Lino). There is no actual roadbut with a 4 wheel drive vehicleyou can go on for another 700m.Continue on foot for 3 minutes,following the signs and arrowson your left and you will reach theMegalithiki gate featuring monolithicrepresentations. Now walkto the right following the arrowsfor 15 minutes to get to the chiseledwinepress (Lino).Carry on down the main dirt roadand in 1km you will see a sign forthe “Odysseio ditch”, and a fewmeters further on you will enterthe Synaxi area (meeting point). To get to the beach, turn right atthe junction to find Synaxi with its early Christian finds. In ancienttimes, ships sailed from Synaxi to bring pilgrims to Samothrakito the Sanctuary of the Great God. Continue for another 1.5kmdown the dirt road, with a view of the sea, and you will find theruins of a castle.After that, carry on to the right and you come to the camp siteand Petrota Beach. The road continues along the shore and 6kmfurther takes you to Arxaia Zoni which is in itself a special and aparticularly interesting place to visit (See Regional Unit of Evros).