From Xanthi to Thermes 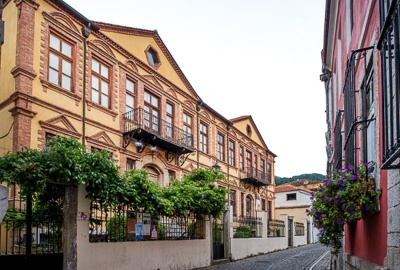 From Xanthi set off for Pomakohoria and Thermes. You cross a unique landscape, verdant, with traditional settlements and tobacco crops. You encounter Sminthi, Miki, Ehino in succession and arrive at Thermes in just over an hour, having driven 44.15km. The Relief of Mithras Tauroctonos The Relief of Mithras Tauroctonos (Mithras the Bull-slayer), dating to 2nd - early 3rd century AD, was chiseled out of a large rock, near Thermes Village in Xanthi and depicts Mithras (God of the Sun, of Persian origin) sacrificing a bull in the centre within a relief frame, which symbolizes a cave. To the right and left are the God’s disciples, Kautis and kautopatis. The archaeological site is open to visitors. For more information, contact LA’ EPKA Telephone: +30 25410 51003, +30 25410 51783 Xanthi Xanthi is a Byzantine city and believed to be guarded by the angels as testified by the “place’s marks”, according to historian Dimitris Mavridis. The monasteries of Pammegiston Taxiarxon, Panagia Arhongeliotissa, Panagia Kalamus and Agios Giorgios Monastery (according to recent research, there is a church of the same name there today) are situated at the four corners of the horizon, as if by analogy to the four tips of a cross, “crossing” the area and perpetuating the town’s existence. Xanthi is one of the few towns in Greece which has developed harmoniously , with respect and consideration for its history and past. A multicultural town, it has managed to gain a place in the heart of all its inhabitants, regardless of religion or ethnic origin. The Old Town of Xanthi “At that time, a copy of the belle epoch co-existed with authentic Turkish Minarets, and this gave colour and content to a very diverse population consisting of people from from all corners of Greece, who had accidentally ended up in the border area and could be seen dancing the Charleston in public squares” Manos Hadjidakis The Old Town of Xanthi is located in the northern part of the town and constitutes its historic nucleus. It covers an area of 380,000m2. The town was built after 1829, the year great earthquakes completely destroyed the previous settlement. The town was built on the ruins and around churches which had probably been there since Byzantine ‘Xantheia’. During the 19th century, Xanthi was a small town of 8,000 residents, financially prosperous, thanks to wealth from the cultivation, processing and transportation of tobacco and its products, but also because of its privileged position on significant trade routes. The town was built by Epirote and Macedonian craftsmen. It is characterized by its winding cobbled streets and filled with simple Balkan houses, inns, shops, churches, characteristic of the last Ottoman period, but also western neoclassical mansions whose owners were mainly tobacco merchants. In the old town there are 1,200 listed buildings. Of these, 140 are considered highly remarkable, 130 remarkable 260 of special interest. Mansions such as the one belonging to the tobacco merchant Kougioumtzoglou, which is home to the town’s Folk Museum, or Orfanidis’ mansion, today the Municipal Building. The old garrison headquarters where the great musical composer, Manos Hadjidakis, spent the first years of his life, has been preserved and is home to the “Manos Hadjidakis” multiplex of Art and Thought. The Municipal Picture Gallery of Xanthi “Chr. Pavlidis” is an excellent example of traditional West- Macedonian-Epirote architecture with its wooden ceilings being the chief feature, unique in the region and Tobacco Warehouse P at 9, Kapnergates Street, which belongs to the Foundation of Thracian Art and Tradition.